With the recent sudden influx of visitors to Japan, there has been also a rise in complaints about the lack of free Wi-Fi hotspots. In an effort to solve this problem, a Japanese telecommunications company, Wire and Wireless Co., Ltd., introduced a free Wi-Fi connection app two years ago, called TRAVEL JAPAN Wi-Fi, for tourists to Japan, while the app is free of charge. Recently the coverage of this service has been expanded, allowing connections at a massive 200,000 hotspots throughout Japan. Visitors from abroad can download this TRAVEL JAPAN Wi-Fi app before coming to Japan, and by completing a simple set-up procedure, they can use hotspots at over 200,000 locations within Japan for free. 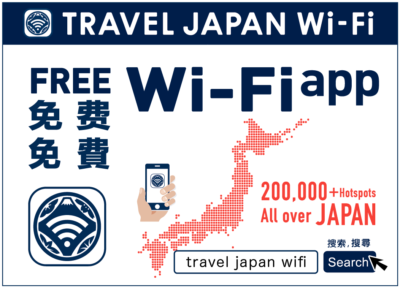 By downloading TRAVEL JAPAN Wi-Fi and completing a simple set-up process before leaving their countries, tourists can launch the app upon arrival, leave it running in the background, and get a Wi-Fi access at all the major airports in Japan, including Narita Airport and Haneda Airport in Tokyo, New Chitose Airport in Hokkaido, Fukuoka Airport in Kyushu, and Naha Airport in Okinawa. The app automatically connects with free Wi-Fi hotspots such as Wi2, Wi2_Club, Wi2premium, and Wi2premium_club at major train stations, tourist spots, popular shops, and restaurants and cafes such as Don Quijote, Bic Camera, KFC and Starbucks. Users can enjoy Wi-Fi connections with no limits on data usage, and at no cost. This app is designed specifically for tourists from overseas, and runs on both Android and iOS devices. It has already been downloaded by over 1.5 million users duing the last two years since its launch, and has received rave reviews. In addition, this app automatically provides tourists with information on nearby shops and sight-seeing spots, as well as a wealth of discount coupons. The TRAVEL JAPAN Wi-Fi app is multi-functional and it is a personal assistant for all travelers in Japan.

The app is available in multiple languages, including simplified Chinese, traditional Chinese and English. Currently, people from Chinese speaking countries account for nearly 45% of the user base. It is the most downloaded and popular free Wi-Fi app among tourists visiting Japan, and it also has a high level of security. Michiko Seto of Wire and Wireless Co., Ltd. explains, “There are many spots where this TRAVEL JAPAN Wi-Fi app can be used, but the fact is that they are mainly concentrated in busy, densely populated areas like shopping districts. If the main destination on your trip is the mountains or the seaside, I recommend you to get a Wi-Fi router, and mainly use it when you’re on the road or in remote locations, whereas when shopping or eating out, use the free Wi-Fi app hotspots with unlimited data usage.” Not being able to share your experiences, thoughts and pictures from your trip on SNS would take away half of the fun of travelling. Luckily, TRAVEL JAPAN Wi-Fi app makes sure that doesn’t happen.

Also, as December marks the two-year anniversary of the service, a new version of the app was released to make it even more user-friendly.
Michiko Seto also calls for users’ attention to make sure they go to the official website and check that they can see the logo with the deep blue Wi-Fi sign and Mt. Fuji before downloading, since there are many apps including those that are similar to TRAVEL JAPAN Wi-Fi in the market.