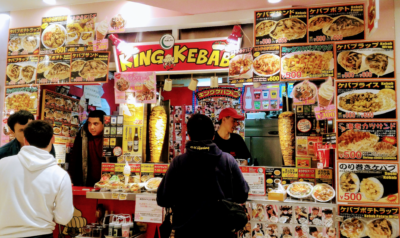 We did it again! I mean my husband and I, we keep hunting for delicious kebab in Tokyo (also other area in Japan). Maybe we should start a YouTube channel called “Kebab Hunter”! Haha, just kidding!

This time we went to Harajuku. It was pouring rain that we can’t really enjoy the Takeshita Street as we usually do. We were so hungry because it was a little bit late and we were thinking that it wasn’t possible to just eat in a normal kebab stand (most of kebab shop in Tokyo is a kebab stand which is you have to eat standing or sitting outside) because of the rain.

We walked from the Takeshita Street gate in the Harajuku station end and when we finally reach the other end we saw a men was standing holding an advertisement of a halal kebab shop nearby. The good news was the kebab is located in a food court which was mean that we can Enjoy eating without had to worry of being soaked because of the rain.

To be honest, this kebab shop was the coolest kebab shop I have ever visited. It’s name is King Kebab. We ordered 3 menu and compared to other kebab shop, this shop has more menu variations to choose. So far, this is my favorite kebab shop in Tokyo because I could taste the spices boldly that I was so satisfied after eat. They also have 10 variations of sauce for you to choose. 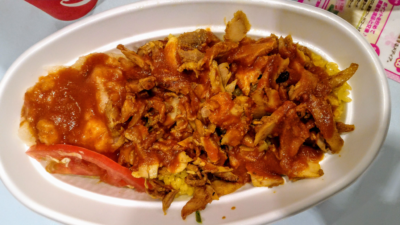 This menu offered chiken-beef kebab meat with yellow rice and potato. There was 2 options of size of portion which is medium and large. The price of the medium potion is 550 yen and the large one is 650 yen. I ordered the medium one and the portion is just enough for me.

I choose spicy sauce for this menu and I love their spicy sauce because I could really taste the spicy, not like other kebab shop spicy sauce which sometimes taste mild. The marinade spices is also tasted boldly which my most favorite reason why this shop is one of my favorite. 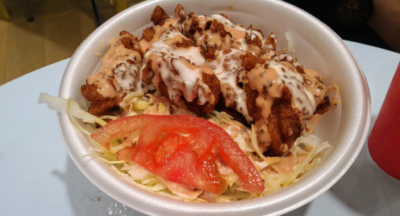 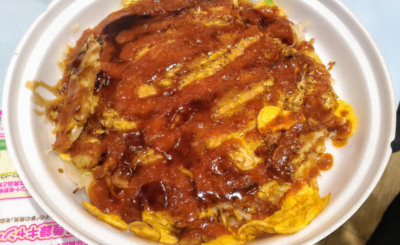 Kebab yaki was another interesting one. When I see the food, I was thought about an okonomiyaki style kebab. Initially I was having a doubt about how the taste going to be like, but after taking a bite, I like it very much that I remembered a happy-grin was drawn in my face. I choose the habanero sauce for this menu which was the spiciest one and it is spicy but I still like it. The price of this menus is 500 yen. Here are the options of sauces available at the shop: